Five Pillars of Islam: Quotes for Kids : In this article we collected some authentic quotes of the last messenger Muhammad (PBUH). Readers can understand what Islam says about this pretty creature. 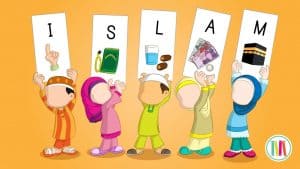 Narrated Abdullah bin Amr bin Aas: The Apostle of Allah (peace be upon him) said, “ Command your children to pray when they become seven years old, and beat them for it (prayer) when they become ten years old; and arrange their beds (to sleep) separately.” (Sunan Abu Dawood)
Narrated Nu’man bin Bashir: The Prophet (peace be upon him) said: “Act equally between your children; Act equally between your sons.” (Sunan Abu Dawood)

“Anas bin Malik reported, “I served the Prophet (PBUH) for ten years. By Allah, He never said to me, “Uff”.He never said harshly for anything, “Why did you do that? Or why did you not do that?”

Amr said, “Once we were eating something and my hand was traveling on the plat. His meant his hand was going here and there. The messenger said to me, “ Boy! Start with the name of Allah, eat with your right hand and eat from what is near you.” (Bukhari and Muslim)

The prophet said, “Who said to any child, “Come and take” and didn’t give him, he is a liar.” (Musnad Ahmad)

The prophet said, “One who has three or two daughters or sisters and accompany them best and fears from god his place is (reserved) in paradise.” (Tirmidhi)

The prophet said, “One who cares of an orphan, he and I will live together in paradise as like as these two fingers.” (Bukhari)

The prophet said, “No plant is better than the plant of good teachings what a man plants in his children.” (Tirmidhi)

“Whoever brings up two girls till they reach the age of puberty, he and I will come on the Day of Resurrection like this,” (and he joined his blessed fingers.)

The beloved Prophet (Peace and Blessings of Allah be Upon Him) has stated that,

It has been narrated in a Hadith that the Holy Prophet (Peace and Blessings of Allah be Upon Him) has stated that,

“If parents are kind and generous towards their daughters, then they will be so close to Him (The Holy Prophet Peace and Blessings of Allah be Upon Him) in Jannah, like one finger is to the next.”

The Holy Prophet (Peace and Blessings of Allah be Upon Him) has also stated that,

“The person who is faced with hardship due to his daughters, and makes Sabr (is patient), then his daughters will be a Pardah (curtain) between him and the Hell-fire.”

Hadrat Ibn ‘Abbas reported that the Messenger of Allah (SallAllahu Alaihi wa Sallam) said,
“…and whoever brings up three daughters or a like number of sisters, training them well and showing kindness to them till Allah enriches them (i.e. till they reach the age of puberty), Allah will guarantee Paradise for him.” A man asked: “O Messenger of Allah! Does this apply to two also?” He said: “even to two.” If they had asked whether to one also, the Messenger of Allah would have said that, “even to one…”

“Whoever had a female who was not buried nor insulted by him, and had not preferred his male children to her, Allah admits him to Paradise.”

Daughters are without doubt a great blessing from Almighty Allah. They are a means of salvation and a path to Jannah (Heaven) for their parents.

The crux of one narration states that,

“One who loves his daughters and withstands the hardship of grooming and getting them married, Almighty Allah makes Jannah compulsory (Waajib) on him and keeps him protected from the Fire of Hell.”

And in another Hadith, the beloved Prophet SallAllaho Alaihi wa Sallam said:

“They will be a shield for him from the Fire.”

“Whenever you buy anything from the market place first present it to your female children then to your male children.”

Daughters are a gift from Almighty Allah. Those parents who are kind towards them, then Almighty Allah is generous towards such parents.

Those who are merciful to their daughters, Almighty Allah is Merciful towards them.”

“When a girl is born to a family, then between the parents and Hell, there shall be a distance of five hundred years.”

Read More  Muhammad, the last prophet, The evidence of His prophethood

Related Tags:- Five Pillars of Islam for Kids Quotes in English with Images