Jawed Ahmed Ghamidi – Pakistani public intellectual and scholar of the Qur’an Javed Ahmad Ghamidi. Al-Mawrid Institute of Islamic Sciences and Danish Sara, a sibling organization, were both founded by him. Jawed Ahmed Ghamidi was born on April 7, 1952, as Mohammad Shafiq in Punjab Pakistan in the Kakazai family. He completed BA in English. He was awarded Sitara e Imtiaz in 2009 by the government of Pakistan the third big award in Pakistan.

A member of the Council of Islamic Ideology, Ghamidi received Pakistan’s third-highest civilian honor, the Sitara-i-Imtiaz, in 2009. He has a sizable middle-class professional following and frequently appears on TV shows.

He received Islamic instruction from many experts throughout his formative years at Govt. College Lahore, joined Mawlana Mawdudi’s Jamaat-e-Islami, studied under Amin Ahsan Islahi’s guidance beginning in 1973, and was influenced by the writings of Imam Hamiduddin Farahi.

Thinker and exegete Javed Ahmad Ghamidi is currently on a mission to redefine Deen in accordance with his perceptions. In opposition to the conventional narratives, he has also created the religious counter-narrative.

Javed Ahmad Ghamidi’s interpretation of Deen has undergone a paradigm shift that is quite unprecedented, and as a result, Muslim scholars from all over the world have voiced their strong disagreement and disapproval. 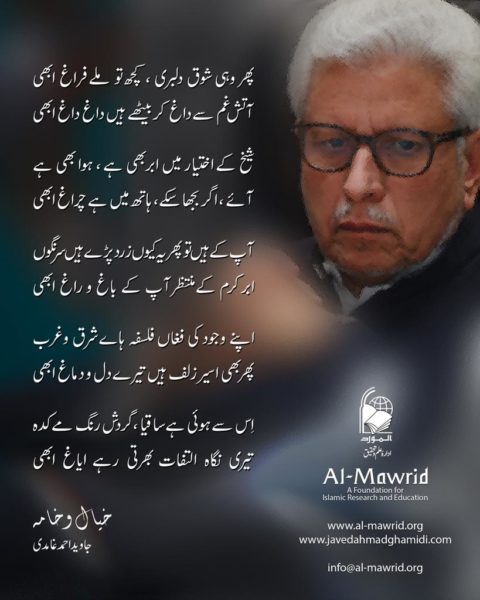 The main distinction, however, is that in Ghamidi’s paradigm, the elements or components of Deen are moved and given a new position according to his own ideas and perceptions, which has a significant impact on their relevance and centrality.

Despite the fact that it is not novel and everyone has done it, Although he calls them traditional, he yet criticizes earlier philosophers for placing this idea in an improper and illogical way.

According to Syed Maududi, the main goal of sending prophets to humanity is to establish deen with all of its constituents or to put Sharia into practice in order to present and complete Hujjat for the global populace.

According to him, Deen as an organic whole ensures salvation in the hereafter as well as peace, prosperity, harmony, and all other sorts of rewards in this life. He underlined that Deen must have the ability to manifest itself fully for this reason since it is the full code of existence.

Muslims, therefore, have a primary responsibility to build Deen as a sovereign entity in order to participate in its blessed system.

On the other side, Javed Ahmad Ghamidi asserts that Muslims are not required to build Deen and elevate it to a position of authority. He makes it clear that the messengers were not at all sent for this purpose.

The Almighty chooses His messengers in order to use them to administer reward and punishment in this world before the actual Day of Judgment. It turns becomes a small-scale practice run for what will happen on that day.

As a result, the very fact that these messengers exist becomes a sign of God, and it appears as though their followers can see God administering judgment while accompanying these messengers on earth. based on the concrete indications of truth they possess.