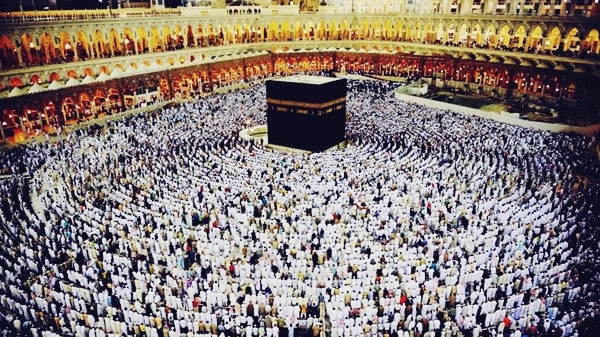 It is one of the five pillars of Islam alongside shahada, Salah, Zakah, and Sawm.

The Hajj is a demonstration of the solidarity of the Muslims, and their submission to Allah.

Hajj means “to intend a journey,” which connotes both the outward act of a journey and the inward act of intentions.

The Hajj pilgrimage occurs from the 8th to the 12th of Dhul Hijjah. Dhul Hijjah is the last (12th) month of the Islamic calendar.

The date of Hajj is determined by the Islamic Hijri calendar. Every year, Hajj’s events take place in five days, starting on the 8th and ending on the 12th of Dhul Hijjah (the twelfth and the last month of the Islamic calendar.) Hajj 2020 will start on 28 July 2020.

Among these five days, the 9th Dhul Hijjah is known as the ‘Day of Arafat’, and this is also called the ‘Day of Hajj.’

From Makkah to Makkah via Mina, Arafat, Muzdalifah

The Hajj begins with Ihram. Ihram is the name given to the special spiritual state in which pilgrims wear two seamless white sheets and abstain from specific actions.

During Hajj, the pilgrims join processions of hundreds of thousands of people, who simultaneously converge on Mecca for the week of the Hajj, and perform a series of rituals: 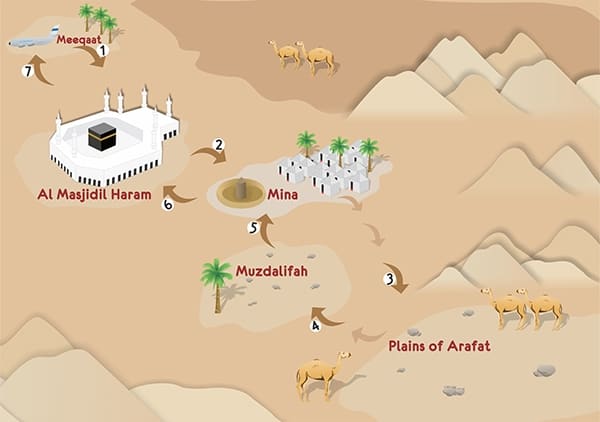 On 8th Dhul Hijjah in the morning, Pilgrims go to Mina and stay there a whole day.

On 9th Dhul Hijjah in the morning, they go to Arafat, where they remain till the sunset.

After maghrib without offering Maghrib Salah, they started to spend a night in the plain of Muzdalifah praying to Allah and asking Him.

On 10th Dhul Hijjah, having offered fajr prayer early at dawn, pilgrims return to Mina before the sun rises and perform a ritual of animal sacrifice.**

After that, they go to Makkah again and perform the last Tawaf.***

Having performed Tawaf e Ziyarah, they go to Mina and perform stoning the devils.

On 11th Dhul Hijjah, they perform stoning all three devils one by one, seven stones at every devil.

On 12th Dhul Hijjah, they perform stoning all three devils one by one, seven stones at every devil.

After that, they go to Makkah again and perform Tawaf e Wada before returning to their homes.

On this, the Hajj has been completed, and now the pilgrims may come back to their homes.

The Hajj is associated with the prophet Muhammad (S) ‘s life from the 7th century, but the ritual of pilgrimage to Mecca is considered by Muslims to stretch back thousands of years to the time of Ibrahim. (A/S)

The present pattern of Hajj was described by the prophet Muhammad (S) However, according to the Quran, elements of Hajj trace back to the time of Ibrahim (A/S) around 2000 BCE.

According to Islam, Ibrahim was ordered by Allah to leave his wife, Hajarah, and his son Ismail alone in the desert of ancient Mecca.

In search of water, Hajarah desperately ran seven times between the two hills of Safa and Marwah but found none.

Returning in despair to Ismail, she saw the baby hitting the ground with his knee, and a water fountain sprang forth underneath his foot. Later, Ibrahim was commanded to build the Kaaba and to invite people to perform pilgrimage there.

The archangel Jibreel brought the black stone from Heaven to be attached to the Kaaba.

Prophet Muhammad (S) performed his only and last Hajj in the previous year of his age with many followers and taught them the rites of Hajj.

That’s all about the Hajj and how to perform the Hajj. We tried our best to explain as we can. Hope you understood. We humbly request you to remember all the Muslims and us during your Hajj prayers.

**but it depends on the wish

Related Tags: How to perform Hajj,