As we have taken help from Islamic scholars to provide you with 100% accurate and correct information with references from the Qur’an and Islamic Books. To resolve your questions about the five pillars of Islam!
MUSCULATION of the abdominals to lose your belly and slim your waist for men and women – MUSCUL steroids uk 5 reasons to have a weight training diary.
This blog will be up-to-date with all types of Islamic topics and information with proper references. Keep reading the article The Five Pillars of Islam with Pictures, which will resolve each and every doubt you might have about it.

We would like to request you bookmark our blog so that you can get all the latest updates and news. And don’t forget to share this knowledge with your friends and family to be aware. 5 pillars of Islam in English! 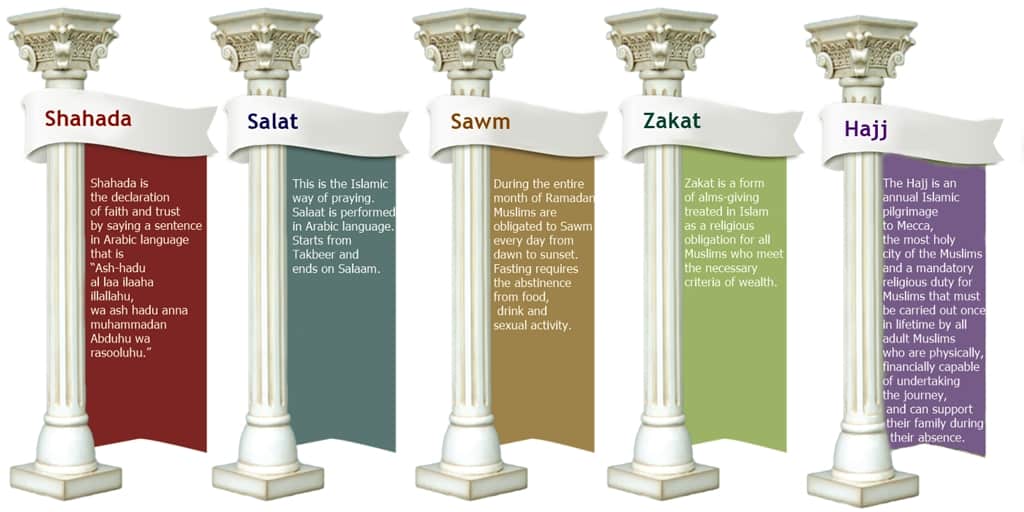 Islam is the very first religion in world history. It’s been there since time immemorial or since man’s foot was set on the earth. There are so many misconceptions about Islam, one of those is that Islam is a new religion that came into existence fourteen hundred years back and Muhammad (PBUH) was the founder of Islam.

This is not wrong only but also a lie because Muhammad was the last messenger of Islam, not the founder of Islam. Allah sent him as a messenger here as sent a number of messengers from time to time, like Jesus, Moses, and Noah.

Allah said in the Holy Quran Surah Anbiya Ayat no 25 “And we didn’t send any messenger before you but said him “There is no god else me so worship to me”. Yes, they were only for their region and their locality and Muhammad was for all mankind “we sent you for all worlds” Allah said.

Islam an Arabic word that means peace according to language and to submit your will to Almighty God. One who believes in Islam is a Muslim, so the Muslim is a person who submits his will to almighty God.

Islam believes in one and only God who is Allah. Allah is an Arabic word that means is worthy of worship. The origin of this word is Allah means God. Allah sent many messengers to earth to remind us that there is only one god and he is only who is worthy of worship and the system of the world is in his hand, so man should obey him.

Here is the list of The Five Pillars of Islam in English:

Meaning: “I bear witness there is no god to be worshiped but Allah and Muhammad is his servant and his messenger”.

This is the Islamic way of praying. Salaat is performed in the Arabic language. Starts from Takbeer and ends in salaam. Salaat is accompanied by a series of standing, bowing, prostrating, and sitting. Muslims may perform salaat anywhere on the earth wherever the time of prayer finds them.

Nabi(SAW) said,” The earth has been made a place of prostration and a means of purification for me. So wherever a man of my ummah is when the time for prayer comes let him pray. (Sunan Nasai 432)

There is no limitation on special places for performing Salaat however the mosques are common places for this purpose.

Wudu is compulsory for every salat. 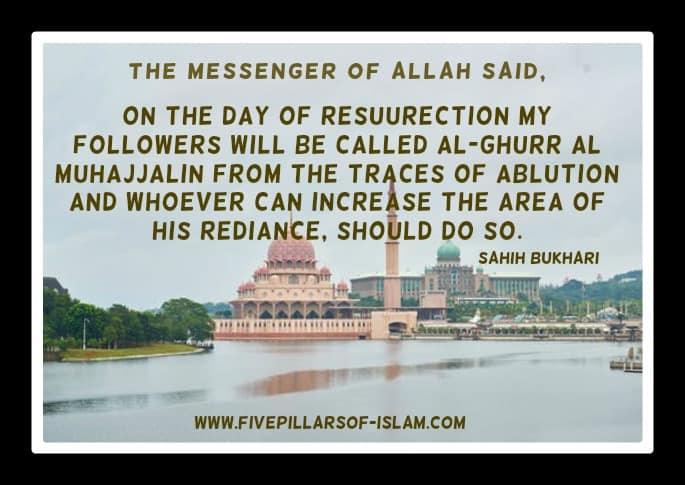 Fasting in Islam is known as Sawm – Five Pillars of Islam Fasting. Allah prescribes daily fasting for all able and adult Muslims during the whole of the month of Ramadan, the ninth month of the lunar calendar.

Muslims must abstain from food, drink, and sexual intercourse in the month of Ramadan from dawn to sunset. This is obligatory for those who have reached puberty. Sawm is the practice of piety and devotion. Fasting is not prescribed in Islam only but every religion has a form of fasting in it.

Fasting helps develop self-control because abstaining from permissible things grows patience and self-governance. Each and every moment during the fast a person suppresses their passions and desires in loving obedience to God.

This consciousness of duty with the spirit of patience helps in strengthening one’s faith. Fasting teaches the principle of God-consciousness because fasting doesn’t occur without deep love.

(And keep up salaat and pay Zakat and contribute for Allah’s Sake a contribution.73:20)

Zakat literally means that which purifies. Zakat purifies wealth as Salaat purifies the soul. Zakat is a form of alms-giving treated in Islam which by Quranic ranking is next after prayer in importance. That’s why Allah mentioned it with the salaat at many places.

Zakat is binding on all believers who have wealth above Nisab. Zakat is based on savings, not income and the value of all of one’s possessions. It’s 2.5% or 1/40th of a Muslim’s total savings and wealth above Nisab. The Nisab of gold and silver fixed by the messenger of Allah is as follows,

The recipients of zakat according to the Quran are as follows:

“Zakat (Alms) are for the poor and the needy; and those employed to administer the funds; for those whose hearts have been recently reconciled to Truth; for those in bondage and in debt; in the cause of Allah; and for the wayfarer. It is ordained by Allah and Allah is full of knowledge and wisdom. (SoorahTawba9, verse 60) 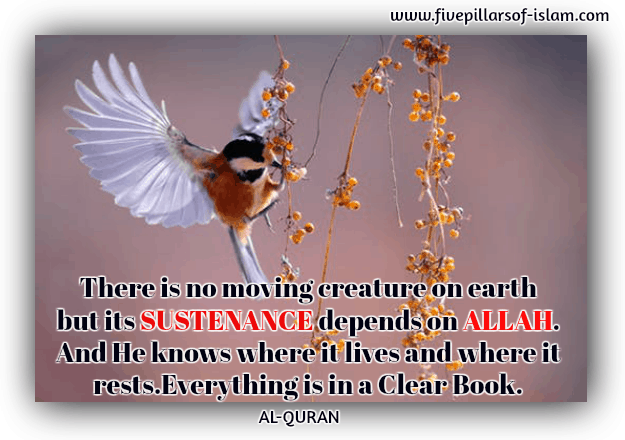 To whom zakat cannot be given?

Zakat cannot be given to parents, grandparents, children, grandchildren, husbands, wives, or non-Muslims.

Hajj is one of the five pillars of Islam, The Hajj literally is to intend a journey and according to Islam is the annual Islamic pilgrimage to Makkah, the holiest city of the world.

This is a mandatory religious duty for Muslims that must be carried out at least once in their lifetime by all adult Muslims who are physically and financially capable (Mustati) of undertaking the journey and can support their family during their absence.

“As a right of Allah, it is obligatory on the people to perform Hajj of the house on everyone who has the ability to manage his way to it.”soorah ale imran3 verse 97.

The Hajj occurs from the 8th to the 13th of Dhul hijja, the last month of the Islamic calendar.

There are five Meeqats on five different sides for visitors to enter from different sides, described by the prophet Muhammad (saw). The names of these meeqat are as below

When the pilgrims enter the meeqat dons two white seamless sheets that are wrapped around the body. It is known as Ihram. This is a unique dress for pilgrims during the hajj for they all become the same, for they feel that they gather in the name of one God and they are sons of one father, they are followers of one religion and one messenger. Wearing it pilgrims can cut neither their hair nor their nails. He can’t use perfume also. He can’t go to his wife.

After that, the pilgrims enter Makkah and go to masjid haraam and perform their tawaf e ziyarat by walking seven times around Kaaba and by running seven times between Mount Safa and Mount Marwah. This running is called Sayee.

On the 8th of Dhul hijja pilgrims go to Minaa (5 km to the east of Makkah) in their tents and stay there for a night. The next morning they go to Arafat (16 km far from Makkah in the southeast) where they stay till the afternoon and listen there speech (Khutba) of Ameer e Hajj. They perform the Zuhr and Asr prayers together in Zuhr time.

Having performed these two salaats they go to Muzdalifa (an open ground between Minaa and Arafat) where they perform Maghrib and Isha prayers in Isha time and stay there the whole night praying. After performing Fajr prayer they return to Minaa in their tents on the 10th of Dhul Hijja, where they perform rami jimar as throwing seven stones. After that, they sacrifice animals in commemoration of Abraham’s sacrifice.

The hajj serves as a unifying force in Islam by bringing followers of diverse backgrounds together in religious celebration.

So, friends, these are the pillars of Iman. We hope that you liked our article. Now you can share this article with your friends and family members for more Islamic guides you can subscribe and bookmark our blog so that you never miss any important updates.